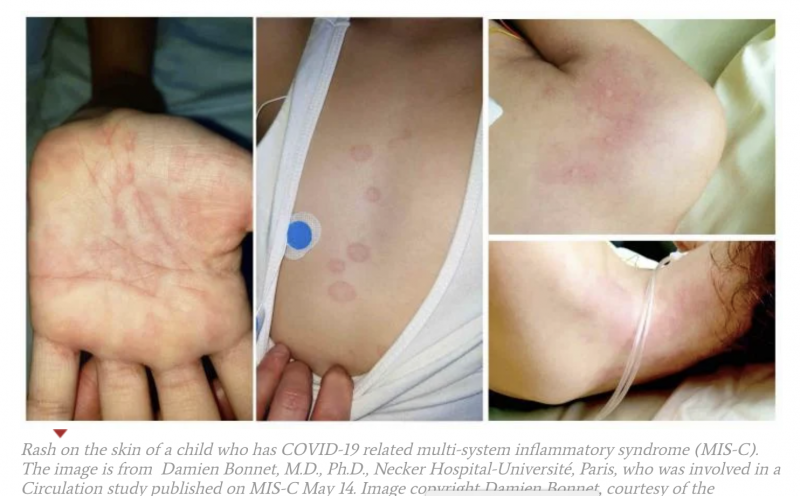 A new, serious COVID-19 cardiovascular presentation emerged in late April and early May 2020 in the form of pediatric multi-system inflammatory syndrome, which includes features similar to Kawasaki disease. It was first reported in the United Kingdom and then cases began to appear in New York City and elsewhere in the United States.

The U.S. Centers for Disease Control (CDC) first issued a health advisory statement on the new COVID-19 (SARS-CoV-2) presentation May 14.[1] The CDC is calling the new presentation in kids multi-system inflammatory syndrome in children (MIS-C). The CDC called for healthcare providers report any patient who meets the case definition to local, state and territorial health departments so data can be collected to enhance knowledge of risk factors, pathogenesis, clinical course and treatment of this syndrome.

On April 26, 2020, clinicians in the U.K recognized increased reports of previously healthy children presenting with a severe inflammatory syndrome with Kawasaki disease-like features.[2] The Royal College of Paediatrics announced in a statement most kids are asymptomatic or exhibit mild symptoms when infected with COVID-19. However, in the last two months a small number of children have been identified who develop a significant systemic inflammatory response. The college said affected children may require pediatric intensive care and input from experts in pediatric infectious diseases, cardiology and rheumatology.

A study in London published May 7 highlights what researchers called "an unprecedented cluster" of 8 children with MIS-C during a period of 10 days in mid-April.[4] The study said typically London sees one or two children per week with hyper-inflammatory shock, similar to atypical Kawasaki disease, Kawasaki disease shock syndrome or toxic shock syndrome. This case cluster formed the basis of the U.K. national alert.

Early Experience With MIS-C in the U.K.

"The only good news from COVID seemed to be that children only had mild disease, and as the disease arrived in the U.K. that was the general pattern. Very few became critically ill. So there was a surprise amongst a number of us working in several London Hospitals when several pediatricians started to notice this unusual illness. We had children who were admitted to pediatric intensive care units, critically ill with a very unusual syndrome," explained Michael Levin, MBE, Ph.D., FRCPCH, FMedSci, professor of pediatrics and international child health Imperial College London. He was among the researchers looking at the new syndrome in the U.K. and spoke at a CDC briefing on MIS-C May 19.

He said they looked at the presentations of 37 patients in London and other cities in southern England. The reviews varied, but most had prolonged fever, sore throat, headache, and particularly with abdominal pain (in 57 percent of patients) and vomiting. Some also had rash and conjunctivitis. Levin said the children progressed rapidly to shock and organ disfunction. All of the patients has similar lab results with elevated C-reactive protein, neutrophils, profoundly lower lymphocytes and elevated D-dimers, and some had elevated troponin and brain natriuretic peptide (BNP) levels, suggesting cardiac injury, he explained.

Only a third of the patients were PCR COVID-19 positive, however, a very high number of kids tested positive for coronavirus antibodies. "This suggested that the majority of patients testing negative for the virus for positive for antibodies would suggest that this illness is mediated by the development of a acquired immunity to COVID, rather than by direct viral injury," Levin said.

About 38 percent of patients had acute kidney injury with raised creatinine levels, but only one patient required renal replacement therapy (RRT).

"Unlike adults with COVID, only a third had respiratory symptoms," Levin said.

Shock occurred in 75 percent of the children and 51 percent had clear myocardial impairment.

The New York City Health Department issued an alert May 4, stating the inflammatory syndrome had been observed among children and young adults in New York City and elsewhere in the United States.[5]

Clinical features vary, depending on the affected organ system, but include features of Kawasaki disease or features of shock, explained Demetre C. Daskalakis, M.D., MPH, deputy commissioner, Division of Disease Control, New York City Health Department. Persistent fever and elevated inflammatory markers (CRP, troponin, etc.) have been seen in the affected patients. Some patients who have been admitted to pediatric intensive care units (PICUs) have required cardiac and/or respiratory support.

"However, the full spectrum of disease is not yet known. Only severe cases may have been recognized at this time," Daskalakis said.

The NYC Health Department said it contacted PICUs in New York City during April 29-May 3, and identified 15 patients ages 2-15 who had been hospitalized from April 17- May 1, with illnesses compatible with this syndrome. This includes symptoms of typical Kawasaki disease, incomplete Kawasaki disease and/or shock. All patients had subjective or measured fever and more than half reported rash, abdominal pain, vomiting or diarrhea. Respiratory symptoms were reported in less than half of these patients.

In the New York patients, polymerase chain reaction (PCR) testing for SARS-CoV-2 was been positive in 4 patients, negative in 10, and initially indeterminate and then negative in one patient. Six patients with negative testing by PCR were positive by serology. More than half of the reported patients required blood pressure support, and five required mechanical ventilation. No fatalities have been reported among these cases.

Cardiac injury and myocarditis have been described in adults with COVID-19, but SARS-CoV-2 infection in children is typically minimally symptomatic.

However, a study in Circulation published online May 17 reports a series of pediatric patients with acute heart failure potentially associated with SARS-CoV-2 infection and the MIS-C. The study looked at 35 pediatric patients from France and Switzerland over a two-month period who had been exposed to COVID-19 and had an emerging condition with features overlapping toxic shock syndrome. The patients were ages ages 2 to 16.[6]

The researchers’ key findings were:

• Multi-system inflammatory syndrome in children is a new syndrome that appears to be temporally related to previous exposure to SARS-CoV-2.
• MIS-C shares similarities with atypical Kawasaki disease, but prominent clinical signs are largely different. Myocardial involvement with acute heart failure is likely due to myocardial stunning or edema rather than to inflammatory myocardial damage.
• Whereas the initial presentation may be severe with some patients requiring circulatory and respiratory mechanical assistance, rapid recovery with the use of immune globulin and steroids is currently observed.
• Early diagnosis and management appear to lead to favorable outcome using classical therapies.

Thirty-one (88.5%) children tested positive for SARS-CoV-2 infection, and none of the children had underlying cardiovascular disease. Secondary conditions were limited, and 17% of patients were overweight (n=6). All patients presented with fever and unusual lethargy (asthenia) lasting approximately two days, and 83% of patients (n=29) presented with gastrointestinal symptoms.

“The majority of patients recovered within a few days following intravenous immune globulin, with adjunctive steroid therapy used in one third. Treatment with immune globulin appears to be associated with recovery of left ventricular systolic function,” researchers reported. 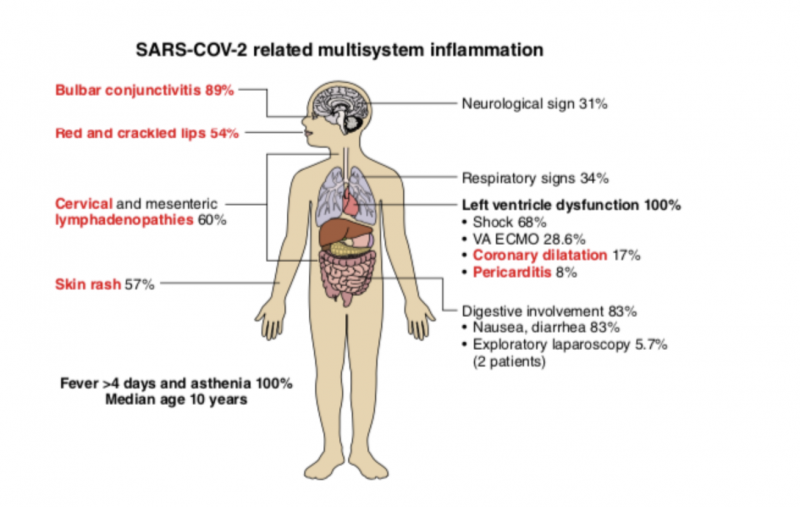 How Should Multi-system Inflammatory Syndrome Patients be Treated?

Daskalakis said pediatricians should immediately refer any patients who seem to have MIS-C to a specialist in pediatric infectious disease, rheumatology and/or critical care, as indicated. Early diagnosis and treatment of patients meeting full or partial criteria for Kawasaki disease is critical to preventing end-organ damage and other long-term complications.

Daskalakis said cases that should be reported include :

• Patients younger than age 21 with persistent fever (four or more days), and either incomplete Kawasaki disease, typical Kawasaki disease, and/or toxic shock syndrome-like presentation; and
• No alternative etiology identified that explains the clinical presentation, including those regardless of SARS-CoV-2 PCR test result.

He reported patients meeting criteria for Kawasaki disease should be treated with intravenous immunoglobulin and aspirin.

"The majority of patients responded quickly to treatment, but two children did require ECMO therapy, and one child died as a result of a complication from ECMO with an intercranial thrombus and hemorrhage," Levin explained. "Many of them took quite a bit of time to come out of the intensive care unit."

Radiology studies of MIS-C patients in the U.K. had mixed results. Levin said some of the chest X-rays and computed tomography (CT) scans had normal findings, but some revealed inflammation.

Some chest X-rays showed smaller bilateral pleural effusions, patchy consolidation, focal consolidation or a complete or partial collapse of the entire lung (atelectasis). Chest CT included the same findings as on chest X-rays, but all included some areas of nodular ground glass opacifications.

"The cardiac findings were striking, with 8 out of 19 patients who had echocardiograms having evidence of impaired left ventricular function impaired. Coronary artery dilatation or aneurisms were present in 5 of the 19 patients. One patient had a giant left coronary artery aneurysm," said Levin 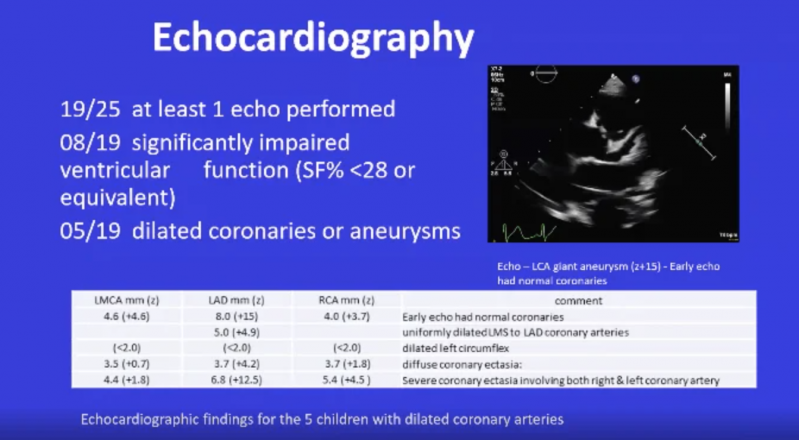 Comparison Between Pre-COVID and Pandemic MIS-C Cases in Italy

The researchers concluded the SARS-CoV-2 epidemic was associated with high incidence of a severe form of Kawasaki disease. They expect similar outbreaks of Kawasaki-like disease in countries involved in the COVID-19 epidemic.

The CDC created a Clinician Outreach and Communication Activity (COCA) webinar May 19 to explain MIS-C in more detail. Presenters in the two-hour webinar and question/answer session included several physicians from the Centers of Disease Control and Prevention, Imperial College London, Cohen Children’s Medical Center and Emory University School of Medicine. The experts explain the clinical characteristics of multisystem inflammatory syndrome in children, how cases have been diagnosed and treated, and how clinicians are responding to recently reported cases associated with COVID-19.